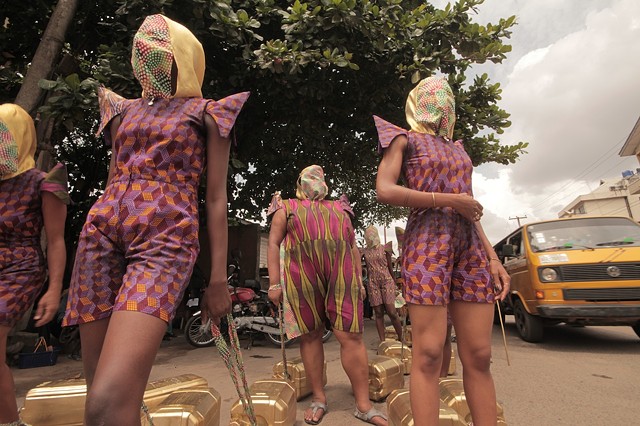 Will I still carry water when I am a dead woman?
< previous next >

Will I still carry water when I am a dead woman? 11am, Thursday, April 18, 2013 Centre for Contemporary Art, Lagos #9 McEwen Street, Sabo, Yaba

I created the first version of Will I still carry water when I am a dead woman? in 2011 in Lagos. I crawled along the ground with water kegs tied to my ankles. The piece was inspired by the daily task of carrying water at my cousin's house. I observed how this particular work was largely something that me and my female cousins performed. This is not to say that men do not do this task.

The performance on April 18 built upon this work but was performed with a group of women walking through the streets of Lagos, again hauling water kegs. While the piece poses questions about the work of women, it is also about labor and the politics of change. How much is enough? What is the tipping point in a society where people struggle to meet basic needs? When do people have an opportunity to rest, reflect, envision, imagine, and enact another way of being? I am particularly interested in the role of women in these dialogues.

The costumes refer to traditional masquerades but with an Afrofuturisic touch. Here, I am thinking about the Egungun masquerade which women are not allowed to perform. Masquerades are quite powerful for both community and performer. The masked dancer is allowed to go anywhere; they are protected. People are not allowed to even touch them. There are men who holds sticks (and use them) if you attempt to get too close. Will I still carry water when I am a dead woman? draws from this tradition by allowing women to occupy a sacred and dynamic space within the public environment. But in this case, there is a constant recontextualization of the sacred and the profane as we perform the arduous (if not impossible) task of hauling water kegs through the city.